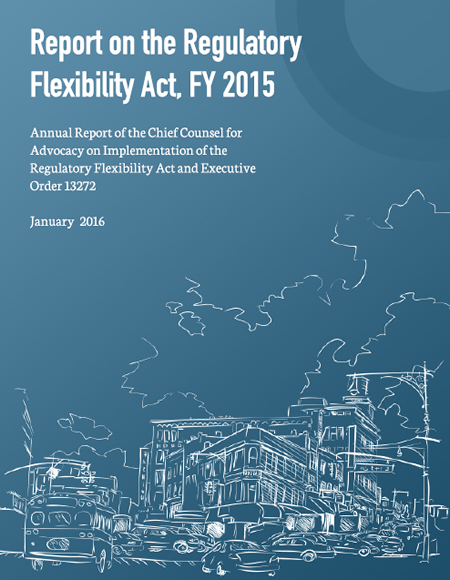 The Office of Advocacy releases the Regulatory Flexibility Act report annually to inform Congress of how well agencies are complying with the RFA. The fiscal year 2015 report includes interviews with four former chief counsels for advocacy. Former Chief Counsel Frank Swain, who was in office when the RFA was enacted, said, “The RFA, because of its statutory basis, is going to be around indefinitely.”

The report celebrating the 35th anniversary of the RFA also includes a detailed history of the RFA and the Office of Advocacy. You can read how the office has evolved with multiple executive orders issued by Presidents Bill Clinton, George W. Bush, and Barack Obama.

The RFA was enacted by Congress in 1980 after the first White House Conference of Small Business was held. It was a high-profile event that engaged small business representatives from across the United States. The RFA mandated that agencies consider the impact of their regulatory proposals on small businesses, analyze equally effective alternatives, and make their analyses available for public comment. The hope with this legislation was that it would cure the one-size-fits-all regulations that had been issued from agencies. The RFA was created to help small businesses have a voice in the federal government rule making process. The chief counsel for advocacy of the U.S. Small Business Administration has been designated to monitor agency compliance with the Regulatory Flexibility Act.

The second White House Conference on Small Business was held in 1986. It was noted that the effectiveness of the RFA depended on small business awareness of the proposed regulations and their ability to voice their concerns to the regulatory agencies.

In 1995, the third White House Conference on Small Business was held and it helped to renew the call for strengthening the RFA. President Bill Clinton and Congress enacted the Small Business Regulatory Enforcement Act of 1996 (SBREFA).

Advocacy is constantly looking for ways to improve the RFA. We want to make the regulatory process smoother and easier to navigate for small businesses. At 35 years old, RFA compliance has improved significantly and hopefully will continue to be a useful tool for the small business community.

If you are interested in reading more, the FY 2015 RFA annual report can be found on our website here.