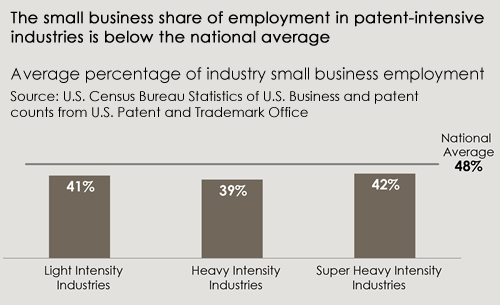 Congress has ramped up efforts to pass patent reform legislation after years of debate and discussion. This increased attention to intellectual property has touched on the importance of patents to small businesses. Small businesses may be particularly affected by patent reform since startups rely on patents for fundraising, and entrepreneurs build on newly discovered technologies. Established small businesses that rely on intellectual property protection and licensing would be affected as well.

As the chart below shows, these small businesses tend to employ more people on a per-firm basis than the national average. U.S. small businesses have an average of 10 employees per firm. In contrast, small firms in “super-heavy” patent intensity industries—or those which receive over 9 percent of all patents issued to corporations (corporate patents)—employ 24 employees per firm. Small businesses in “heavy intensity” industries (which receive between 2 and 6 percent of all corporate patents) employ almost double the average number of people per firm. Continuing the trend, small firms in “light intensity” industries (which receive between a half percent and 2 percent of corporate patents) employ over double the average number of people per firm. 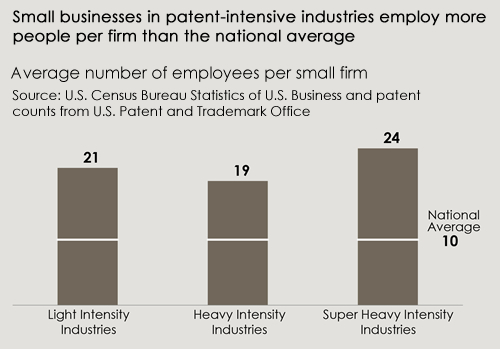 Starting is the Hardest Part