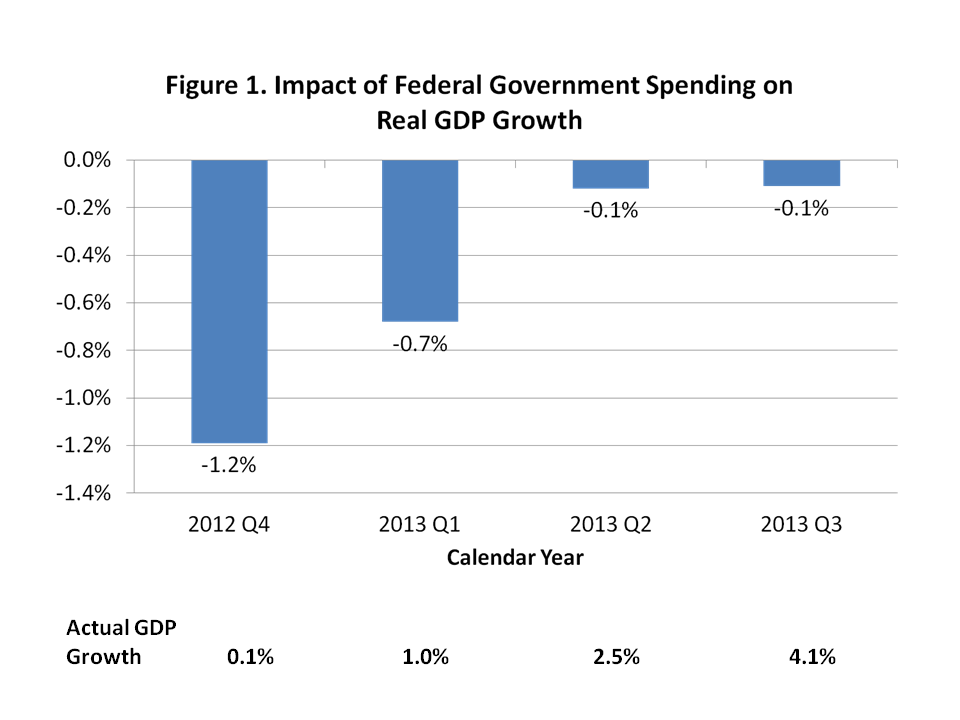 Positive Small Business Indicators in 2013 and the Challenge Ahead

The Year in Review: Implications for Small Businesses

Two important economic indicators released late in 2013—employment and interest rates—give us some optimism about small business and economic growth trends. Both of these indicators are key to consumer spending, which drives two-thirds of our nation’s economic activity.

At 7 percent, the unemployment rate in November 2013 was at its lowest level since 2008. Small businesses are responsible for 63 percent or 4.3 million of the 6.9 million jobs created since the recovery began. Interest rates rose slightly during the year but remain at historical lows. This has benefited the interest-sensitive construction and automobile industries, which had suffered sharp downturns following the Great Recession. In November 2013, building construction employment reversed its downturn and increased 3.3 percent over the prior year; 85 percent of these jobs are in small businesses. While automakers are typically large businesses, 74 percent of jobs in motor vehicle and parts are found in small businesses; these have benefited from 5.4 percent employment growth in this sector.

In addition to these promising trends, lower interest rates and dwindling inventories have led to double-digit increases in home prices in major metropolitan areas. The S&P/Case-Shiller Index of property prices in 20 cities climbed 13.6 percent from October 2012, the biggest 12-month gain since February 2006. Home equity is an important source of capital for small business, so improvement in home prices and home equity should boost access to capital.

Small business lending also improved in 2013. Bankers continued to ease their lending standards to small firms, demand for loans increased, and delinquency rates decreased. Small business loans (excluding those for commercial real estate) increased by 2.2 percent between September 2013 and a year earlier (the most recent data).

These many reasons for economic optimism were tempered by reductions in federal spending. Most economists agree this kept economic growth from its full potential. Reductions in federal spending in the fourth quarter of 2012 decreased real gross domestic product (GDP) by about 1.2 percent (Figure 1). As a result the economy grew only 0.1 percent during that quarter. While the impact of the sequester’s automatic spending cuts waned throughout the year, the Congressional Budget Office (CBO) estimates that the nation generated 5 million fewer jobs from its full potential in part due to the FY2013 sequester.

The scheduled FY2014 budget sequester would have caused additional dampening of economic activity this year had it not been for some relief due to the federal budget deal enacted in late December. Specifically, the budget agreement raises the discretionary spending cap for domestic and military programs by $62 billion in FY2014 and FY2015. These higher caps are paid for through various fees and revenue provisions over the next 10 years, leading to a projected net $23 billion of deficit reduction. The new budget also extends the sequester another two years past the original 2021 target end date.

The Year Ahead: Fiscal and Monetary Policies Pose Challenges for Small Businesses

Looking forward into 2014, small businesses’ success will depend on the strength of demand for their goods and services. In order to expand their operations and hire more workers, small businesses must feel certain that the economy will continue to grow. Thus, strong consumer confidence and less uncertainty about the future are important to future growth. From a federal policy perspective, there are three key areas of uncertainty in 2014:

In February 2014, the debt limit for federal borrowing will expire and Congress must once again consider raising the nation’s debt ceiling. While the approaching deadline may tempt some lawmakers to try to leverage significant changes to the budget, most agree that using the debt limit as a bargaining chip has significant unintended consequences. Allowing the federal government to go beyond that date and default on our nation’s debt is not acceptable to financial markets or the public at large, and certainly would harm the economic environment for small businesses.

Beyond just raising the debt limit, some lawmakers may begin to seriously address later in 2014 the core component of rising federal debt—the growth of federal entitlements. At the same time, they could include reform of the federal tax system as part of the deliberations. Beyond the uncertainty associated with the timing of these decisions, the method chosen and the extent of reform to both entitlements and taxes could have important implications for small businesses.

The rising federal debt problem is real and growing. According to CBO, the debt-to-GDP ratio is projected to exceed 100 percent in the next 25 years, meaning that our nation’s debt will exceed the value of our annual output. However, the last few years of budget cuts have focused on discretionary spending, which represents only one-third of our federal budget and is determined through the annual appropriations process. In fact, discretionary spending is at historical lows compared to GDP. The main source of the debt in the next two decades is what is called mandatory spending—outlays that are not subject to the annual budget process but are instead automatically obligated each year based on previously enacted laws that set eligibility and benefit levels for each program. A majority of small businesses identified reform of entitlement spending as their favored means of deficit reduction (Figure 2).

Most mandatory spending is for entitlement programs such as Social Security and Medicare. A combination of the aging of the population and rising health care costs are expected to accelerate the growth in these programs as well as the nation’s federal debt over the coming decades. According to the Congressional Budget Office, in order to bring the debt-to-GDP ratio back to historical levels, the federal government will have to reduce spending by $4 trillion over the next decade (as compared to the $1 trillion target under the current budget agreement). Achieving this goal would require significant increases in taxes, significant cuts in benefits or services, or both.

From a small business perspective, changes to the Social Security or Medicare payroll tax rates or even changes to the taxable wage base to determine payroll tax liabilities would adversely affect their profitability in the near term. In addition, since most physicians operate as small businesses, continued reductions in provider payment rates to offset Medicare’s rising costs will also adversely affect their ability to grow and survive. Finally, if tax reform is discussed, the approach adopted must take into account the specific considerations of small businesses. Advocacy recently published research on the tax preferences most important to small business (Measuring the Benefit of Federal Tax Expenditures Used by Small Business).

The third area of uncertainty is monetary policy. Many of the sectors doing well in 2013 were interest-sensitive industries like durable goods (e.g., automobiles) and housing. These sectors have benefited from the Federal Reserve’s large-scale purchase of government securities (a policy known as “quantitative easing”) which has kept interest rates at historical lows. Since quantitative easing was always intended to be a short-term stimulus in the wake of the financial crises, there is some degree of uncertainty about when the Federal Reserve will start “tapering” back on government security purchases and how long this process will take. Most important to small businesses is the question of how tapering will affect interest rates and their ability to access capital in 2014. Statements by outgoing Federal Reserve Chairman Ben Bernanke indicated that 2014 would be a crucial year for tapering, and this will be a key issue for the newly confirmed Federal Reserve Chairman, Janet Yellen. Planning for these decisions will pose a critical challenge for small businesses in 2014.

Credit Scores and Credit Market Outcomes: Evidence from the Survey of Small Business Finances and the Kauffman Firm Survey

Starting is the Hardest Part