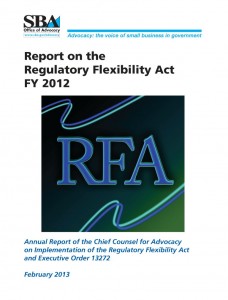 Small businesses were spared $2.4 billion in first-year regulatory costs in FY 2012 through the Office of Advocacy’s work with federal agencies to ensure that regulations complied with the Regulatory Flexibility Act (RFA). The act requires federal agencies to examine proposed regulations for their impact on small entities, and to consider alternatives that minimize the regulatory burden yet still achieve the rules’ purpose.

These cost savings are found in the Office of Advocacy’s Report on the Regulatory Flexibility Act FY 2012. The congressionally mandated report details agencies’ compliance with the RFA over the past fiscal year.

“I am proud that Advocacy is living up to its reputation as the small business watchdog within the federal government,” said Dr. Winslow Sargeant, chief counsel for advocacy.  “As a former small business owner myself, I know small businesses don’t have the time or resources to keep track of all the proposed federal rules and regulations.  So, our job is to monitor that process for small businesses.  Advocacy’s guiding purpose is to work with federal agencies to get the results they want, while easing the burden of those regulations on small businesses.”

Advocacy’s Report on the Regulatory Flexibility Act FY 2012, shows the office’s work helping federal agencies comply with the RFA.  In addition to regulatory review, the report summarizes agencies’ progress in complying with Executive Order 13272, which requires them to create a systematic rule review process geared toward reducing the regulatory burden.

From holding roundtable discussions around the country, to issuing comment letters on proposed regulations, to training federal agencies on RFA compliance, the report outlines Advocacy’s work voicing the concerns of small businesses throughout the federal government. 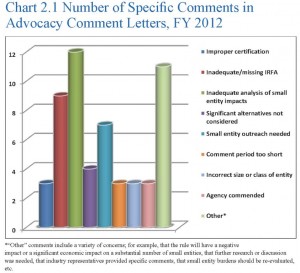 “Small businesses deserve a voice in the regulatory process, especially when a proposed rule or regulation will have a significant economic impact on a substantial number of small businesses.  And, Advocacy works hard to serve as that strong voice,” said Sargeant.  “We believe—and our congressional mandate reflects this belief—that regulations are more effective and long-lasting when small businesses are part of the rulemaking process.”

The Office of Advocacy bases its cost savings primarily on agency estimates.  These cost savings for a given rule are captured in the fiscal year in which the agency takes final action on the rule.

The full report is on the Advocacy website.  Interested small business owners can also sign up there for a number of web-based tools, such as e-mail alerts, regulatory alerts, Advocacy’s newsletter, and various social media accounts that serve to keep small business owners updated on proposed federal rules and regulations.