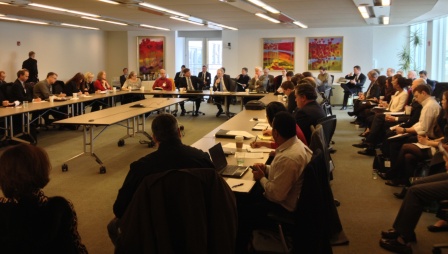 On Friday, January 25, Jordan Barab, the U.S. Department of Labor’s deputy assistant secretary for occupational safety and health, participated in the Office of Advocacy’s regular small business roundtable on labor safety and health issues. Mr. Barab focused his remarks on the Occupational Safety and Health Administration’s (OSHA’s) regulatory agenda for the coming year and beyond.  Mr. Barab also announced that he would be staying on at OSHA for President Obama’s second term, along with other key OSHA leaders, including Assistant Secretary David Michaels and Chief of Staff Deborah Berkowitz.

Mr. Barab laid out an ambitious agenda for the coming year which includes three Small Business Advocacy Review panels. The panels will allow small business representatives to provide input to agency officials before the rule is developed. The topics of the three panels will be Injury and Illness Prevention Plans (I2P2), Infectious Diseases, and Combustible Dust.  He also stated that OSHA planned to publish its proposed rule on Occupational Exposure to Crystalline Silica, which has been pending under review at the Office of Management and Budget for nearly two years. Mr. Barab fielded a host of questions from attendees on such topics as OSHA enforcement policy, workplace injury and illness rates, and implementation of OSHA’s new rules on hazard communication.  It was a collegial and wide-ranging discussion.

Advocacy’s roundtable was well-attended, with nearly 100 participants from across a variety of sectors.  The roundtable meets every other month and focuses on regulatory activity by OSHA, the Mine Safety and Health Administration (MSHA), and other agencies.  If you would like to attend or be added to the email distribution list, please contact Assistant Chief Counsel Bruce Lundegren.