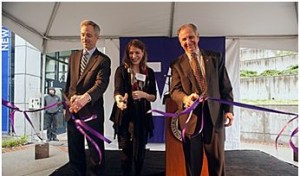 How does a university foster entrepreneurial spinouts from research?

Q: What do these have in common?

A: All three are new companies spun out of research conducted at the University of Washington in Seattle. Earlier this year, they were among the first startups to take up residence in the New Venture Facility in Fluke Hall, part of an effort led by UW President Michael K. Young and UW Center for Commercialization (C4C) Vice Provost Linden Rhoads. Through the New Venture Facility and a number of other initiatives, UW and C4C are making a concerted effort to double the number of startups produced by the UW over the next three years.

The location of the New Venture Facility celebrates Seattle’s dynamism. Fluke Hall was named after John M. Fluke, Sr. a pioneer in the Seattle and Pacific Northwest electronics industry. It’s hard to believe now, but in 1952, David Packard (of Hewlett-Packard) asked Fluke why he would move his company to such a “vacuum” as Seattle. Packard may have been right about some things, but Fluke proved him wrong about Seattle. Fluke helped create UW’s Washington Technology Center and was in the forefront of Seattle’s exploding high-tech world.

President Young joined UW in 2011, bringing his experience as president of the University of Utah, where he helped the university build 2 million square feet of new research and teaching facilities, and led the nation in the number of new companies generated from university research. He’s aiming to boost UW’s startup level next.

Vice Provost Rhoads came on board in 2008 and she and her team are aggressively connecting the dots, arranging meetings among UW researchers, industry representatives, and venture capital firms. Building these relationships is a critical process in forming the commitments that can lead to successful startups.

Both President Young and Vice Provost Rhoads will participate in the Office of Advocacy’s one-day conference in Seattle on September 19. The event is part of Seattle’s “Next Fifty” celebration of the 1962 Seattle World’s Fair, which looks forward, first by looking back at the technologies that formed the platforms for today’s entrepreneurial economy in Seattle.

The City of Seattle and the University of Washington are increasingly important international players in the development of research-based innovations and startups. To learn more, join the Office of Advocacy in Seattle on September 19! For more information and to register, visit Small Business and Government: Maximizing Entrepreneurship, Driving Innovation.