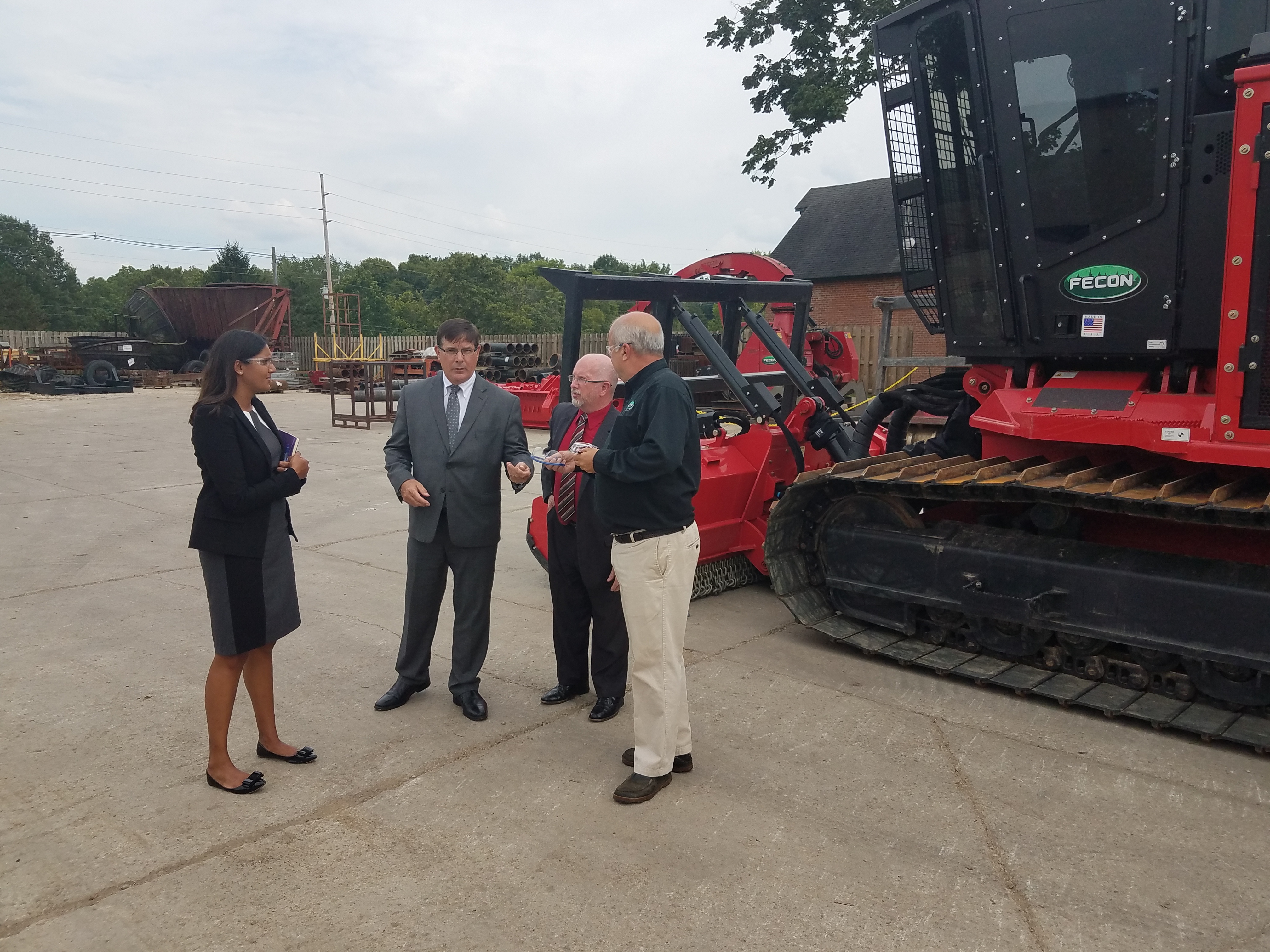 On Aug. 1, Advocacy staff traveled to Lebanon, Ohio to visit FECON Inc., a small manufacturer of foresting equipment. While at the facility, Advocacy staff held a small roundtable with members of FECON’s staff, and representatives from the state and local SBDC’s.

FECON has been operating for 25 years and specializes in mulching attachments for Bobcat machines. They also produce equipment to help clear forests for fire prevention, and to rid forests of non-native invasive species. FECON has 160 employees, and prides itself on being a vertically integrated “one-stop-shop” manufacturer. While touring the 55,000 square foot facility, which is only one of two that FECON now owns, FECON staff described some of the various challenges they face in the industry.

FECON previously got 20 percent of their revenue from overseas sales; however, due to the strength of the dollar, this dropped to 4 percent. They are hopeful that they can get this number back up in the near future. FECON has exported to Australia and Latin America, but their biggest competitors are Europe and the Quebec province. Staff stated that they were in favor of free trade agreements such as the North American Free Trade Agreement because this helps them with their overseas sales. Mexico has been a good partner for FECON in the past.

They stated that the cost of travel and the time commitment are major barriers to export. They are trying to get more staff trained, but it is often cost prohibitive. There are also issues with moving the product across the border. FECON staff described that in Canada, if they have tools on their person when crossing the border they will be stopped at the border, and must get a specific license in every Canadian province in which they wish to do business which is costly, and time consuming. FECON also described challenges with obtaining quality materials. They used to import steel from China, but stated that the Chinese heavily increased the cost of steel so now they buy exclusively from the U.S. and Canada.

FECON staff also described issues with the Occupational Safety and Health Administration, stating that they were visited for the first time in 20 years, and received a violation for unknowingly using the wrong type of sand for blasting. They appealed the violation and it was reduced; however they stated that rather than being so punitive, OSHA should give a warning after the first audit, and only then issue a violation if the company fails to comply.

FECON’s goal is to provide high quality vegetation management equipment worldwide. As witnessed by Advocacy staff while walking through their large warehouse, they have lived up to this goal, and even surpassed it, however not without barriers and obstacles along the way. As a company that prides itself on being not just a local, but global entity, FECON continues to face many challenges with both importing of materials and exporting finished products that are barriers to increasing their percentage of exports. Advocacy staff are hopeful that current reviews of trade agreements, as well as a drop in the strong dollar, will help FECON to continue to grow.

Office of Advocacy Appoints Darryl L. DePriest to Serve as Regional Advocate for…