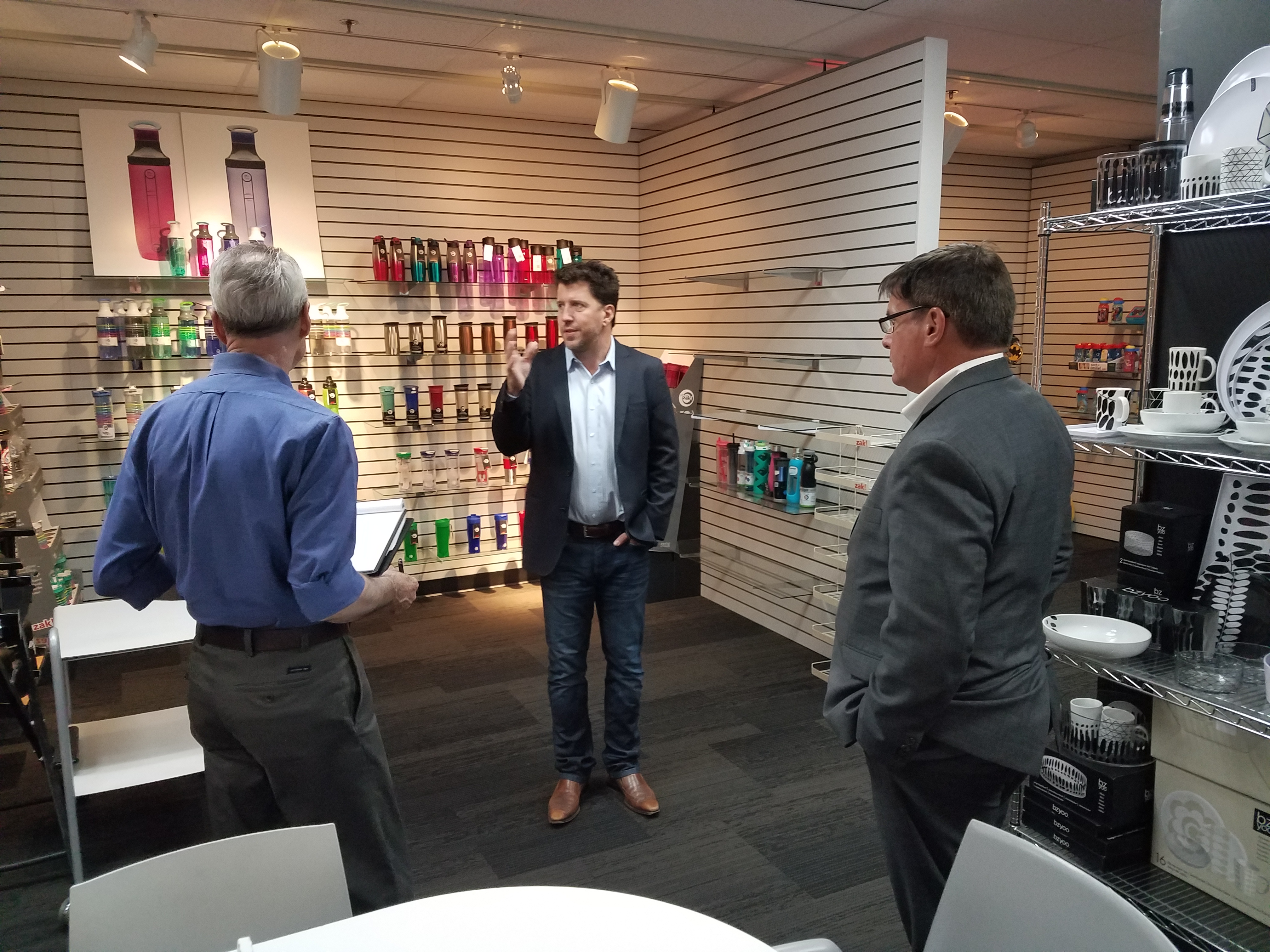 Site Visit: Advocacy has a Colorful Conversation with Zak! Designs

When we visited the warehouse of Zak! Designs on a hot, 95-degree Spokane day, we were ushered into a cool lobby, with light filtering through a skylight two floors above, the soft sound of water splashing over a rock formation in the 15-foot fish pond, surrounded by a forest of dark green plants.

Step into the warehouse area and Pow! Batman springs to life on shelves of plastic cups and plates! Bam! Wonder Woman leaps off plastic glasses and tumblers. Beep! R2D2 trills at us from shelves of mini glasses, gift boxes, and other gear. It’s an explosion of color and cartoon characters.

These are the core products of Zak! Designs, a 40-year-old business dedicated to making mealtime fun. Their licensed products include children’s products featuring Disney, Marvel and Star Wars themes. Staying completely up-to-date, Zak! Designs this year is releasing products related to the 2017 releases of the movies “Cars 3,” “Despicable Me 3” and “Spiderman: Homecoming.”

Most of Zak! products are for children in the three- to eight-year-old age group and eight to 12. Their primary customers are such retail stalwarts as Target, Walmart, and Dollar Tree, but they also market to independent stores as well. Design and distribution is done in Idaho, and production takes place in China. The Spokane operation of 150 people specifically handles distribution to the United States and Canada; customers in the United Kingdom, Switzerland, France, Australia, Mexico, Latin America, Taiwan and China are handled elsewhere.

After expressing appreciation for Advocacy’s visit, Mr. Zakheim explained his belief that some regulations can be simplified, especially those that are unduly burdensome or duplicative.

Mr. Meyer, who sits on the Government Affairs Committee for International Housewares Association, reported that 80 percent of the members of the association have volumes of less than $20 million.

Among the regulatory candidates the participants felt were ripe for reform, requirements for consumer product safety testing was mentioned early. “Ours are safe and meet the regs,” said Zakheim, but he asked whether a system couldn’t be deigned that would not require multiple tests of the same product, and he made several suggestions for such a system.

Participants also discussed how difficult it is to find qualified blue collar workers. This effort is made more difficult by Department of Transportation rules, minimum wage rules and automation. Mr. Zak said that his past practice of hiring high school students as entry-level employees ended after the state of Washington raised the minimum wage to $15 per hour. He suggested that a “Training Wage” could be established for such entry level hires.

Taxes are a constant source of concern for those around the table, including current discussions of a border adjustment tax and taxes on pass-through entities and other small businesses.

Advocacy left with a deeper appreciation for the challenges manufacturers and retailers face, and the undeniable enthusiasm with which this small business faces those challenges.