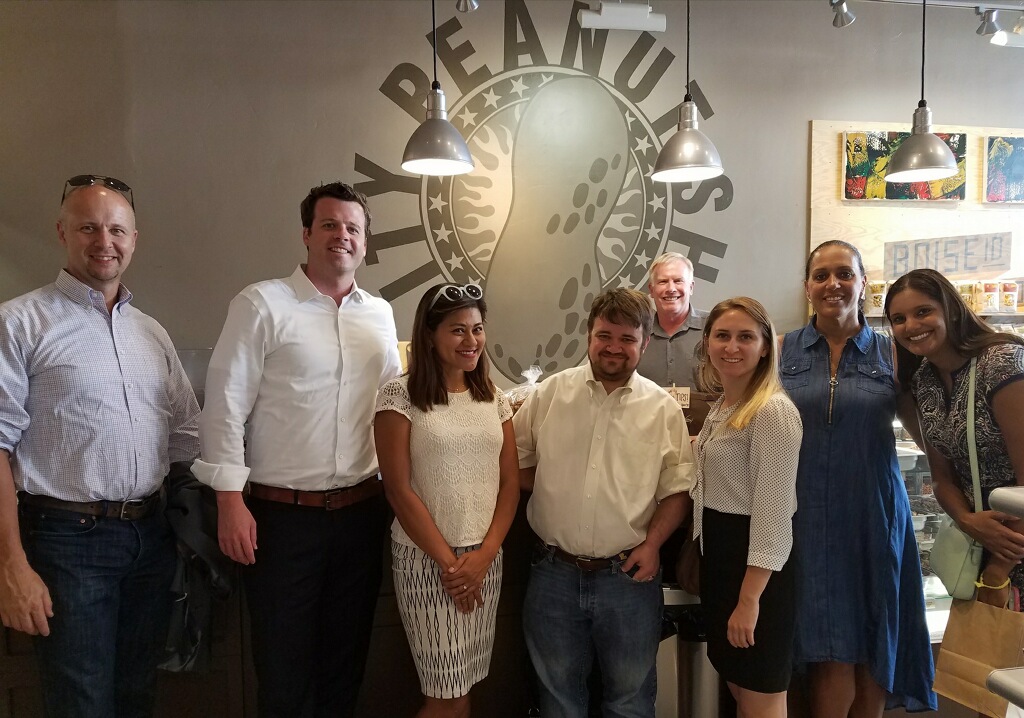 After hosting a Regulatory Reform Roundtable on July 11th in Boise, Idaho, listening to the views of area small businesses, the Office of Advocacy paid a visit to City Peanut Shop, a small business in the heart of downtown Boise that produces and sells unique handcrafted, fresh-roasted nuts, and met with owner and founder Dan Balluff to learn more about his business.

Following his father’s advice, Mr. Balluff opened up the shop during the Great Recession after leaving a successful career in technology consulting working around the globe. With assistance from the Small Business Development Center at Boise State University, he has grown his business from a concept similar to the peanut shops he had enjoyed growing up in Michigan to a mainstay of the Boise downtown food scene.   City Peanut Shop offers a diverse product line of peanuts, assorted nuts, chocolate bars, and flavored popcorn, and has established partnerships with Boise restaurants, craft breweries, and chocolate companies to further grow their presence locally.  Aside from making delicious snacks, Balluff also serves as president of the Downtown Boise Association, and sees small businesses playing a critical role in being incubators for concepts, technologies, and trends that have long-term impacts for both the local and national economy.

To help the Office of Advocacy identify important small business issues, Balluff shared his perspective about the pressures facing his business. As a company with nine employees, Balluff considers City Peanut Shop a “microbusiness,” and too small to be the focus of tax or regulatory relief perceived to be designed for bigger firms. As the voice of small business in government, Advocacy staff discussed ways to use the office’s resources to help all small businesses facing regulatory barriers, even the smallest firms. Balluff suggested that any regulations with recordkeeping and reporting requirements should be simplified and streamlined as much as possible in order for small businesses like his to be able to afford it. At a local level, Balluff stressed the importance of giving communities control in creating an attractive atmosphere for businesses and consumers. Additionally, since local craft beer is featured as a key ingredient for nuts in City Peanut Shop’s brewers series product line, Balluff recommended modernizing and streamlining regulations governing the production and distribution of alcohol that can affect the sales and growth prospects of not just breweries, but their partners as well such as City Peanut Shop.

Advocacy staff thanks Balluff for telling us his “nutty” story and giving us the opportunity to learn about his business.

Advocacy was in Idaho and Washington for Regional Regulatory Reform Roundtables July 11-13.

Patrick Delehanty is the Acting Director of Economic Research/Regulatory Economist for Advocacy. He can be reached at Patrick.Delehanty@sba.gov.

Regulatory Roundtables Get to the Coeur of the Matter