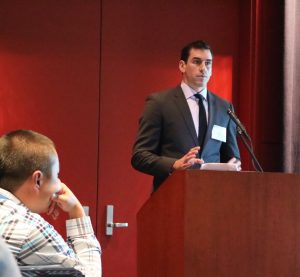 The JSM is a conference of all of the major US and international statistics organizations. It boasts having over 6,000 attendees and over 600 sessions on topics ranging from new developments in statistical software programs to ways to better communicate information through graphics. Advocacy was invited to participate. Research Economist Richard Schwinn presented his contribution to Advocacy’s cutting-edge transformation of its State Economic Profiles. Data Visualization Designer Sarah Coleman, Regulatory Economist Jonathan Porat, and Research Economist Miriam Segal attended the JSM to expand their analytical capabilities and help promote some of Advocacy’s great research and design work.

Advocacy presented as part of a larger session on Administrative Records and Data Disclosure that was sponsored by the Government Statistics Section of the Committee on Applied Statisticians. The session was chaired by Statistician and Mathematician Jioashen You of the US Department of Transportation and included presentations from other government agencies on the role of data presentations in government. Jessica Helfrand of the Bureau of Labor Statistics presented on the policy implications of methodological changes in its quarterly employment and wage data. Erin Tannenbaum from the National Opinions Research Center (NORC) at the University of Chicago described how data visualization of the Centers for Disease Control data can promote good policy by quickly and effectively determining geographic disparities in key indicators of good health.

Schwinn presented his contributions to the 2016 State Economic Profiles by focusing on the value of reproducibility in government data and how he was able to use statistical software to improve the reproducibility of Advocacy’s publications. His presentation was greatly received by the audience and catalyzed an interesting discussion between other government practitioners and academics in the audience. The audience was particularly interested in Schwinn’s presentation of a simple statistical software template that could be applied in future research to maintain high standards in transparency and clarity.

In addition to Schwinn’s fascinating presentation, Advocacy attended many sessions to improve its research capabilities. These included: 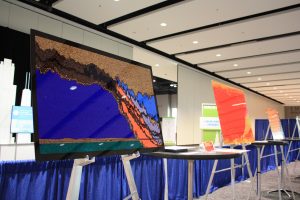 A few of the impressive data visualization examples that were at the conference.

Advocacy was privileged to participate in and contribute to the 2016 JSM. It will be exciting to see how all the valuable information and experience from the JSM will be crystalized into future publications. Advocacy looks forward to continuing to contribute its great work and expand its research capabilities at more events in the future.