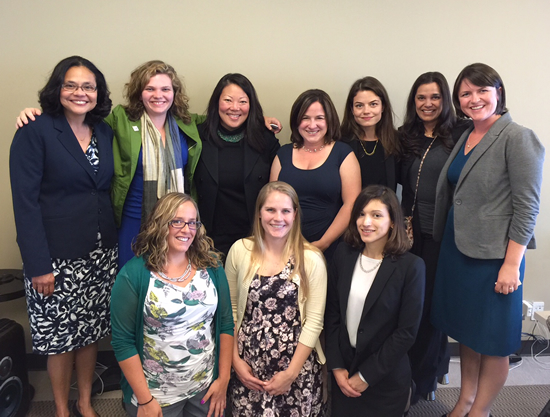 On September 22, three economists from the SBA Office of Advocacy attended the 2015 National Summit on Innovation and Entrepreneurship: A Roadmap for Inclusion. The event was hosted by the Association for Women in Science (AWIS) in Oakland, California. It featured Janet Napolitano, president of the University of California, as the keynote speaker, as well as a diverse array of panelists that included PhD cancer researchers and partners at consulting firms. Attending this event is part of Advocacy’s effort to research and promote the participation of women in STEM fields (science, technology, engineering, and mathematics) entrepreneurship.

Commercialization of inventions is the key step linking research and innovation. It is important to the U.S. economy since it transforms human capital (that is, years of painstaking research) into valuable innovations that create jobs and solve difficult problems. One outstanding example that panelists cited is Christine Ho, a PhD graduate of UC Berkeley. Ho transformed her research on rechargeable zinc batteries – which are more environmentally friendly than lithium batteries – into a company called Imprint Energy. She filed a patent application in 2010 and founded Imprint Energy with a Berkeley business school graduate, Brooks Kincaid, the same year. By June 2012, they had hired five employees, and in June 2014, the company secured $6 million in Series A financing.

However, a 2014 report from the Office of Advocacy shows that Ho’s experience may be relatively uncommon among female PhD recipients. Women with PhDs in STEM fields are only about half as likely to engage in patenting as their male counterparts (15 percent for women vs. 28 percent for men). And within most fields of study, female STEM PhD recipients were less likely to participate in entrepreneurial activity, such as owning a business or working at a startup. In general, women are less likely to be business owners than men. In 2013, 7.2 percent of employed women were self-employed, compared to 11.4 percent of men. Regardless of the cause of this difference, increasing women’s participation in entrepreneurship – and fulfilling unrealized technological potential – could be one way to generate economic growth. Moreover, innovation is not a zero-sum game where one entrepreneur wins and the other loses. If women commercialized more patents, men would not necessarily commercialize less.

Many panelists at the AWIS summit mentioned that although women’s share of the workforce and of leadership positions is increasing, a disparity still exists; and no one was convinced that differences in ability or ambition explain why only 23 of the S&P 500 companies have female CEOs (less than five percent). A common thread throughout the morning was the discussion of unconscious bias. For example, Laura Furstenthal, partner at McKinsey & Company, spoke of a surprising finding after one particular training session on unconscious gender bias: the women in the group actually exhibited more unconscious bias towards women than the men did!

This point underscored the importance of awareness in order to promote diversity and inclusion. In the words of Christie Smith, managing principal at Deloitte, research institutions need to move from “unconscious bias” to “conscious accountability.” This effort would require using big data to hold leaders accountable and should focus on culture rather than on programs. Smith also noted that looking beyond superficial demographic characteristics to find common ground is a great way to foster inclusion. Just as including women in entrepreneurship and innovation is a great way to foster economic growth.