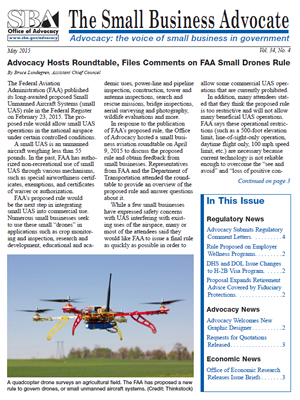 May 2015 Issue of The Small Business Advocate Newsletter Released

The Office of Advocacy has released the May 2015 issue of The Small Business Advocate. This edition features the Federal Aviation Administration’s (FAA) proposed rule governing small unmanned aircraft systems (small UAS), also known as small drones. Advocacy held a roundtable to gather small business input on the proposed rule and submitted a comment letter to FAA on the rule. In addition, the newsletter covers six comment letters that were submitted to federal agencies regarding proposed rulemakings, and three regulatory alerts on new rulemakings. The newsletter also features Advocacy’s new graphic and data visualization designer, new economic issue briefs released by Advocacy’s Office of Economic research, and requests for quotations.

May 19, 2015, Testimony: An Examination of Proposed Environmental Regulation’s Impacts on America’s Small Businesses

The Leahy-Smith America Invents Act: A Preliminary Examination of Its Impact on Small Businesses