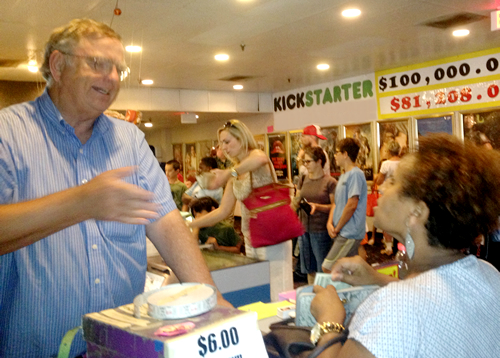 Last week, Economist Jonathan Porat and I visited the bustling University Mall Theatres in Fairfax, Virginia, to speak to owner Mark O’Meara about proposed Department of Justice (DOJ) rules that would require movie theaters to provide special accessibility equipment for guests with visual and hearing disabilities. We met O’Meara at the entrance of the three-screen theater on its popular “Two Dollar Tuesday,” where he sold discounted tickets and welcomed busloads of students and young families to his theater. The highest ticket price at this affordable theater is $4.

“Movie theater owners are all showmen,” said O’Meara. “We want to serve the audience.”

O’Meara has already voluntarily upgraded his two theaters to be able to show movies to disabled guests (he additionally owns another small theater, the Cinema Arts Theatre, which is also located in Fairfax). When he took out a loan of $600,000 to convert his theaters from analog to digital screens, he spent an extra $40,000 to purchase the equipment that the DOJ rules would require. However, under the proposed rules, he may have to purchase more of the devices.

During our visit to the theater, O’Meara allowed us to test the accessibility equipment at a showing of the animated movie “Rio 2.” First, we set up the closed captioning device, which costs around $500 each. The device, which attaches to the seat’s cup holder, allows deaf theatergoers to read the movie dialogue on a small individual screen in front of them. It was amazing how quickly my eyes grew accustomed to reading on this screen. We had previously tested closed captioning glasses (which cost approximately $1,000 each) at another theater. The glasses offered a better experience; however they are twice the price and more fragile.

We also tested the audio description equipment for blind guests, which are headphones that play audio describing what is happening in the scene on top of existing dialogue. Because we were watching a loud cartoon, it was harder to focus and understand what was going on in the movie using this technology.

DOJ released its proposed rules on August 1, 2014 which would amend the Americans with Disabilities Act to require movie theaters to have these technologies available at all movie showings. Digital theaters would have six months to purchase individual captioning devices for roughly two percent of their seating capacity and one audio description device per screen. DOJ is also seeking public comment on whether it should adopt a four-year compliance date for movie theaters with analog or film screens to adopt captioning and audio description requirements or whether it should defer rulemaking on analog theaters until a later date.

For O’Meara, these new rules would mean that he would have to purchase additional devices to meet the two percent requirement, at an estimated cost of $20,000. Under the rules, he would be required to have more than 30 individual captioning devices and nine audio descriptive devices for his two theaters.

Other small businesses may have to expend even more resources if they have not yet converted to digital or purchased additional hardware and individual equipment. O’Meara stated that these high device requirements (2 percent of seats) do not reflect the low demand he has seen for this equipment at his theaters and hopes that the agency will adjust these ratios.

DOJ is accepting comments on this rule until September 30, 2014. The Office of Advocacy is holding a Small Business Roundtable to gather feedback on this rule on Monday, September 15, 2014, from 2:00 to 4:00 p.m. EST at the Small Business Administration Headquarters, 409 Third Street SW, Washington, DC. A conference call line is also available. If you are interested in attending, contact Janis Reyes at Janis.Reyes@sba.gov. Further information on the proposed rule can be found on Advocacy’s web site.