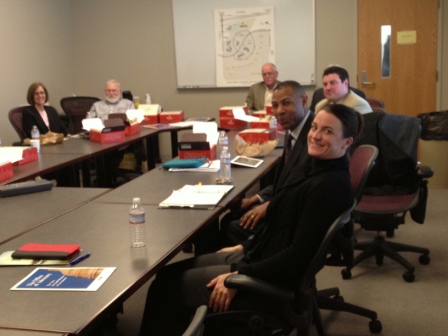 In April, Chief Counsel for Advocacy Winslow Sargeant and I, Region VII Advocate Becky Greenwald, toured three Midwestern hubs of innovation and learning—Ames, Iowa, and Maryville and St. Louis, Missouri. Our adventure through America’s heartland introduced us to cutting-edge research and valuable public-private partnerships. It also gave us the opportunity to listen to and hear from America’s researchers and entrepreneurs. By the fourth day, we left knowing Iowa and Missouri will be home to the innovations of tomorrow.

Ames is home to Iowa State University and anchors the northern end of the emerging Iowa innovation and bioeconomy corridor (between Ames and Des Moines). Dr. Sargeant and I, both proud ISU graduates, were joined by Alex Lynch from Senator Tom Harkin’s Des Moines office and Jeremy Davis from Congressman Steve King’s Ames office. We toured two relatively young programs on the campus of this 155-year-old land grant university, the Virtual Reality Applications Center (VRAC) and the Center for Biorenewable Chemicals (CBIRC).

VRAC is an interdisciplinary research center studying how to use the rapidly expanding interface between humans and computers to tackle complex problems. It is one of only two such centers in the world (the second is in Saudi Arabia). VRAC Director Dr. Jim Oliver took us on a virtual tour of the human body using BodyViz, a software he co-created with Dr. Eliot Winer. The experience was a stunning display of its immense potential to visualize digital images in three dimensions.

Our next stop, ISU’s Center for Biorenewable Chemicals, took us to a facility dedicated to weaning industrial chemical production from its petroleum base to a renewable-resource-based industry. Dr. Peter Keeling, Director of the industrial collaboration and innovation program, briefed us on Iowa’s role as the epicenter for biorenewable research in the U.S. CBIRC is working with 29 industry partners, ranging in size from one-person startups to the global agricultural chemical giant, BASF. So far, five startups have been launched from CBIRC research.

We learned about the broader landscape of challenges facing cutting-edge researchers at a roundtable at ISU’s Research Park, organized by Director Steve Carter. Leaders of five companies, plus service providers with the Pappajohn Small Business Development Center participated in a discussion that touched on patent trolls and/or opportunistic patent enforcement, startup visas, and financial issues ranging from bonded debt, to the tax implications of the LLC structure, to crowdfunding.

Capping the ISU visit were a meeting with Miles Lackey, chief of staff to ISU President Steven Leath, and a stop at the new ISU Alumni Center, and a meeting with Alumni Association President and CEO Jeffrey Johnson.

While in Ames, we also visited PowerFilm, Inc., founded in 1988 by Dr. Frank Jeffrey and Dr. Derrick Grimmer, former 3M research physicists. PowerFilm is a leading developer and manufacturer of thin, flexible solar modules. These fabric solar panels can be found on top of U.S. military tents, backpacks, or even golf carts to charge electronic devices. After a discussion with seven of PowerFilm’s leaders, Dr. Jeffrey led a tour of their advanced manufacturing facility. Employing 75 Iowans, PowerFilm, as Dr. Sargeant noted, is doing its part to stem Iowa’s brain drain by providing advanced manufacturing jobs in the center of the state.

Dr. Sargeant was called to Washington, D.C., to testify before the Senate Small Business Committee and I traveled on to Maryville, Missouri, home of Northwest Missouri State University and the Center for Innovation and Entrepreneurship (CIE). CIE Director Larry Lee introduced me to two of the center’s startups. One of them, ChloroFill LLC, produces formaldehyde-free building materials using sorghum stalks instead of wood. After talking with Lou Hess, ChloroFill’s COO and former IKEA Europe executive, it is easy to understand why he and area sorghum producers are excited about the win-win prospect of ramping up sorghum production. The other startup, BlurPort LLC, founded by 17-year-old college sophomore Aakash Patel, has developed a portable way to secure electronic data storage devices. Mr. Patel, is enrolled in the two-year Missouri Academy of Science, Mathematics, and Computing, an early admission program for exceptional high school students that lets them live on the Northwest Missouri State University campus, pursue a course of study with university faculty and simultaneously earn an associate of science degree and a high school diploma.

Northwest Missouri State’s CIE Analytical Laboratory is part of a beautiful $24 million facility filled with more than $4 million worth of state-of-the-art instrumentation, which is a core resource in the university’s degree program in nanoscale science. The lab operates under the watchful eye of CIE’s professional analytical chemist, Dr. Abdul Mottaleb, whose background includes regulatory EPA and non-regulatory lab experience.

CIE’s advanced instrumentation sets it apart. As I surveyed the sophisticated equipment, I was thinking: Wow, for a school this size, Northwest students must have access to more technical resources on a per student basis than other schools. University President John Janiski confirmed my suspicion. If you divide the maximum magnification power of CIE’s field emission scanning electron microscope—1 million—by the number of students—6,800—you see that Northwest Missouri State University is the number one campus in the U.S for magnification per student. That’s a standout statistic! Can anyone out there beat that?

Dr. Sargeant returned from Capitol Hill and rejoined me in St. Louis. Along with Lou Aboussie from Representative Lacy Clay Jr.’s office we talked with Robert Boyle, CEO of Justine Petersen, Inc., a leading St. Louis micro-lender, about their business model and recent expansion to the Kansas City region.

The week wrapped with a visit to the BioGenerator Accelerator Labs guided by BioGenerator President Eric Gulve. This St. Louis innovation center provides shared and private lab and office spaces along with significant lab equipment for medicinal chemistry, cell biology, molecular biology and biochemistry. Its facilities let researchers and entrepreneurs establish operations and initiate proof of concept studies without having to purchase equipment and rent lab space.

Four non-stop days of listening and discussing innovation and business growth in three Midwestern areas yielded one common theme: creativity and innovation are thriving in America’s Heartland. The challenge is making sure those businesses who are ready and willing to scale can make it happen.

Becky Greenwald is the Office of Advocacy’s regional advocate for Iowa, Kansas, Missouri and Nebraska. She can be reached at rebecca.greenwald@sba.gov.