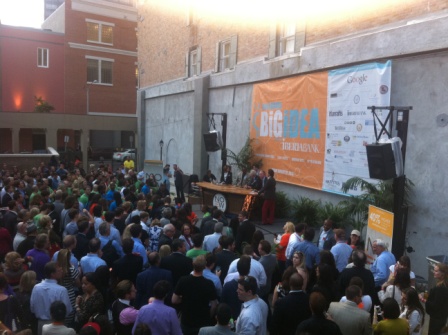 Dreams came true this entrepreneurial season as New Orleans Entrepreneur Week (NOEW) drew to a close last Friday.  To the winners went the spoils—over $200,000 in cash prizes to local start-ups with the best ideas and business pitch. This year’s NOEW was abuzz with activity, engaging more than 3,000 individuals in small business dialogue, including numerous entrepreneurs who competed on eight stages for cash prizes and technical assistance—all focused on helping to strengthen locally based businesses.

NOEW, an annual spring event, is the culmination of the Idea Village’s annual entrepreneur season which starts the previous July; the event allocates over $2.5 million in capital and strategic consulting resources to hundreds of local entrepreneurs through numerous events and outreach sessions. At the heart of NOEW is the IDEAcorps which is a team of seven MBA programs (Tulane, Loyola, Harvard, Yale, Columbia, Stanford, Cornell, and Dartmouth) that descend upon NOLA every spring break to provide free technical assistance to the entrepreneurs in the Idea Village network. Local entrepreneurs receive a solid week of one-on-one assistance from MBA students who also help prepare the entrepreneurs to compete at NOEW for additional capital and technical assistance resources.

The apex of the entrepreneurial celebration and the end of the NOEW season takes place on Friday night on Fulton Street. Thousands of locals gather together to root for 15 entrepreneurs who compete to become one of three finalists who pitch for a chance to win $50,000 in cash prizes awarded by a celebrity panel. This year’s panel included political strategist Mary Matalin, actor Wendell Pierce, billionaire investor Jim Coulter and Archie Manning, the former New Orleans Saints quarterback.

The roar of the crowd produced a tie for first place: Lorenzo Castillo, owner of Education Everytime, a music curriculum business that enhances student engagement and school efficiencies; and Erik Frank, owner of Your Nutrition Delivered, a delivery service for organic pre-cooked meals. The third entrepreneur pitching on the Fulton Street stage was Webster Pierce, owner of WaveRobber, a porous plastic structure that gathers and distributes sediment (from wave action)  to rebuild wetlands. Pierce finished as a runner-up, but he did not leave NOEW empty-handed, having won the $50,000 Water Challenge earlier in the week. He now joins other visionary Water Challenge winners, NanoFex (an environmental technology firm) and Tierra Resources (a carbon offsetting company).

In addition to the Water Challenge, NOEW also featured some outstanding panel dialogues and pre-eminent speakers including Walter Isaacson, President and CEO of the Aspen Institute, and Tina Wells, CEO and Founder of Buzz Marketing Group. Many of the NOEW speakers shared a similar mindset and opined about the importance of sustaining momentum through constant re-invention and living (not just thinking) outside the box. Both speakers stressed that creativity and an independent mind set are key to entrepreneurial success and that no other city reflects this so naturally as New Orleans.

Another less cerebral but equally important dialogue enjoyed by many was one entitled “Failure Fest,” where a panel of young and old entrepreneurs gathered together to discuss their best and worst failures. One (older) panelist, a prominent architecture and engineering businessman, noted that his greatest failure is ongoing—a struggle of not having and/or planning for diverse executive leadership. This entrepreneur emphasized the need to embrace all manners of diversity at an earlier business stage, citing that his inability to do so may ultimately undermine the firm’s long-term viability.

Interestingly, the same theme of diversity and social inclusion echoed throughout various sessions, including a mayoral dialogue on sustaining the larger regional entrepreneurial ecosystem. Some participants noted that more active engagement is needed to ensure that the entrepreneurial movement is as inclusive and diverse as possible. The local chapter of the Association for Corporate Growth (ACG) also recognized this challenge and as part of this year’s NOEW, they along with co-host sponsors, decided to tackle the diversity debate by launching a panel discussion entitled “Louisiana’s Got Talent: A Bridge to Business Growth” which focused on fostering a cultural mindset of doing more business with small diverse, local businesses. Perhaps next year’s NOEW will actively accelerate this nascent movement by doing what it does best—connecting a diverse array of entrepreneurs, and the network that supports them, to dialogue and problem solve about the opportunities and challenges of sustaining an entrepreneurial ecosystem.

Tim Williamson, co-founder of the Idea Village, will tell you that the Idea Village and, by extension NOEW, were formed on the back of a napkin (in a bar) in response to a parochial leadership mindset that feared failure. To this day, that same napkin is now framed, hanging on a wall that boasts news articles about the robustness of the New Orleans entrepreneurial economy (which is 40 percent above the national average).

Rather than fear failure, local entrepreneurs, and a diverse array of organizations supporting them, opted for re-invention. These collective efforts helped redefine New Orleans as the “Coolest Startup City in America” (so named by Inc.com), where with each entrepreneurial season crazy ideas are championed, solutions to real problems are discovered and businesses are launched.  I’m already looking forward to next season.”

Caitlin Cain is the Office of Advocacy’s regional advocate  for Arkansas, Louisiana, New Mexico, Texas, and Oklahoma. She can be reached at caitlin.cain@sba.gov.