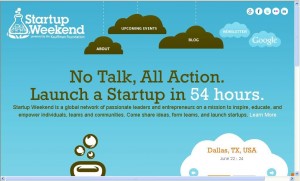 Can shouting out random words in a group of nearly 200 people help start a company?  That’s how the folks at Startup Weekend, a Seattle-based nonprofit, get attendees at their events to “warm up” for a weekend of rolling up your sleeves, getting down to business, and staying up all night to build a company around an idea.

By their own description, Startup Weekend organizes “54-hour events where developers, designers, marketers, product managers, and startup enthusiasts come together to share ideas, form teams, build products, and launch startups.” In just a few short years, Startup Weekend has held 587 of these events in 312 cities spanning 93 countries, resulting in a staggering alumni network of 56,000 entrepreneurs.   And businesses really are launched from these events.  According to their data, over 36 percent of Startup Weekend startups are still in operation after three months.  Almost 80 percent of participants want to continue to work with their team after the weekend concludes.  Those are some strong relationships developed in just 54 hours!

So, back to the shouting.  I had the pleasure of attending a Startup Weekend in Seattle to experience how the weekend works.  After a couple of opening remarks they get right to it.  Facilitators have attendees shout out whatever words come to mind.  Remember, there are roughly 200 want-to-be entrepreneurs in the room!  At first folks are a little timid but then the words start flying and get more entertaining as people loosen up and get into the exercise.  Nobody knows what’s going on or how the words will be used.  When the facilitators think they have all of the words they need, everyone counts off into teams of roughly 8 people.  So now you’re thrown in with a group of mostly strangers to complete an unknown task together.  One team member goes to the front of the room and circles two of the random words that were shouted earlier. Then you finally find out the task—to come up with a startup idea based on your two words, and be ready to present it in ten minutes.

Our words were “comedy” and “idol.” What kind of company can you create from that?! At first everyone looks at each other as if this is some kind of joke. But then the ideas start coming and the teams come up with really creative company pitches.  Our group pitched an app that enabled amateur standup comics to submit videos to be voted on for the chance to win a gig at a famous comedy club.

While these aren’t the ideas that ultimately get worked on over the weekend, the process puts the group into an action mode.  It shows the attendees it’s really possible to work with a team of unknowns to start a company.  Following the warm up exercise, a couple dozen teams form to work on real business ideas that participants come up with and vote on.  Local entrepreneurs act as mentors to the teams over the weekend. On Sunday night, the event wraps up as each team presents their company to a panel of local business experts.

Startup Weekend and nonprofits like it are filling an important role in the entrepreneurial ecosystem.  These organizations introduce entrepreneurs to potential co-founders and other business talent, nurture mentoring relationships with local entrepreneurs, and create networking opportunities with potential business partners and funders.  For nontraditional and innovative startups that may not yet qualify for bank loans, these connections can make the difference between starting a successful company or never getting off the sidelines.

These types of organizations are popping up all over the country.  Can you connect with one in your area?  What can both the public and private sector do to support their success and increase their impact on the startup community?  Interested in checking out a Startup Weekend for yourself?  With so many events planned, there’s bound to be one near you soon.

Startup Weekend isn’t alone in its mission to be the catalyst for entrepreneurial take-off. In Seattle, Northwest Entrepreneur Network (NWEN) and the WBBA (Washington Biotechnology and Biomedical Association) are two others accelerating the growth of local startups. In Ohio there’s JumpStart and in Louisiana there’s Idea Village. A complete list would fill up several more blog posts.  New question: Who’s having an impact in the entrepreneurial ecosystem where you live?

Jennifer Clark is the Office of Advocacy’s regional advocate for Alaska, Idaho, Oregon and Washington.