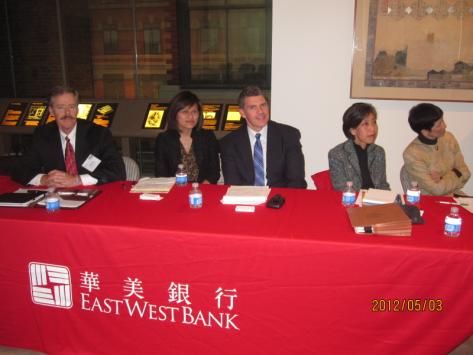 Since 1992, the United States has recognized May as Asian-Pacific Heritage Month, celebrating the culture and history of Asian-Pacific Americans.

My family’s American experience began with my grandfather, who emigrated from China in the 1920s. The 1882 Chinese Exclusion Act had prohibited most Asians from immigrating to this country. Only a limited number of merchants, missionaries, or students were allowed.

Soon after settling here, my grandfather opened a Chinese bakery in New York. He had help from his fellow sojourners, my uncles and aunts who had only known of each other through a common ancestral village in China. They also started their American dream as business entrepreneurs.

Due to exclusionary practices at the time, they would build their business capital by pooling together everyone’s resources to support each others’ businesses. My grandaunt was so successful with her supermarket business that she eventually started a community bank in California’s central valley to help women and minorities start businesses.

Today, those discriminatory practices are no longer tolerated. But the CAN DO entrepreneurial spirit remains strong through subsequent generations of immigrants. Like earlier enterprising immigrants, today’s new Americans continue to make strong contributions to the U.S. economy.

According to the Office of Advocacy’s new study, Immigrant Entrepreneurs and Small Business Owners, and their Access to Financial Capital, immigrants are more likely to start or own a business than non-immigrants. One out of four engineering and technology firms started over a 10-year period was founded by an immigrant. These firms generated $52 billion in sales and employed over 450,000 people in 2005 alone. One past study showed that in Silicon Valley, the U.S. capital of innovation, one-quarter of all technology businesses were run by engineers from India or China.

While their innovative contributions are well documented, many entrepreneurial immigrants still face barriers trying to live and operate their businesses here. In several roundtables hosted by Advocacy this month, many business-owning immigrants shared their experiences of trying to obtain the necessary visas to live and work here. From their perspective, the U.S. immigration system should be designed to welcome entrepreneurial immigrants whose innovative talents help advance U.S. technology and contribute to economic growth. In practice however, current visa programs’ rules and regulations have discouraged enthusiastic inventors and innovative immigrants from making their homes here. The application and adjudication process is so lengthy, duplicative, and confusing that it has forced many talented immigrants to take their innovative businesses back to their home countries.

An attendee of one of Advocacy’s hosted roundtables had just learned her work visa had been denied for the final time by U.S. Citizenship and Immigration Services (USCIS). She has been working in a major high tech company on an H1B visa; she has Ph.D.s in international marketing and computer science from Stanford and Oxford Universities. With a friend, she founded a web-based wedding planning business, and put her technology and marketing talents into building the company as its VP of marketing. Her immigration attorney petitioned for a new visa. But after two years of trying to respond to the adjudicator’s numerous requests for evidence (RFE), her application was rejected for the third and final time. Existing USCIS approval rules require a bachelor’s degree for positions like hers. Despite her advanced degrees, she was deemed “unqualified” for the position, thus her work visa was denied. Her startup company will likely shut down without her. A dozen employees are expected to lose their jobs.

What Advocacy heard in our roundtables is that stories like this are not unique. Thousands of other immigrant innovators, inventors, and entrepreneurs have experienced similar things.

That’s why Advocacy is here—to represent the voice of small businesses. And relief is coming. The USCIS initiated the Entrepreneurs in Residence (EIR) program last fall to improve its employment visa programs. And the White House just announced a new STEM visa program to help individuals with promising, innovative talents in science, technology, engineering, and math fields to remain in the United States. Stay connected with us, and stay tuned.

Yvonne Lee is the Office of Advocacy’s regional advocate for Arizona, California, Hawaii, Nevada, and the territories of American Samoa, Guam, and the Northern Marianas.